Once a High School Dropout, Now a High Honor Student in Falk College

As a public school student in Massachusetts, Chevon Janczuk thought she had her life all figured out. “It turned out my teenage self was wrong,” she says. Janczuk dropped out of high school in her sophomore year, but immediately recognized her mistake. She obtained her GED and after earning certification as a nursing assistant went to work in health care.

However, Janczuk couldn’t make ends meet with the salary she was earning. “Dropping out of high school wasn’t the best decision on my part,” she says. “I knew my calling in life was to help people, so I began to search for jobs that appealed to me. I did an internet search for social work degree programs, and Syracuse University was one of the first to pop up.”

Janczuk called University College and spoke to someone in the advising office who told her about the Arthur O. Eve Higher Education Opportunity Program (HEOP). “The next thing I knew, I was applying to college,” she says.

Janczuk has four children—ages two to eight—and two stepchildren. She finds it challenging to balance raising her children, studying and doing homework. “If you want something bad enough, you find the time for it,” she says. “Sometimes it requires waking up before the kids and staying up late. Other times it requires staying extra hours on campus to take advantage of the quiet in the lounge or library.” 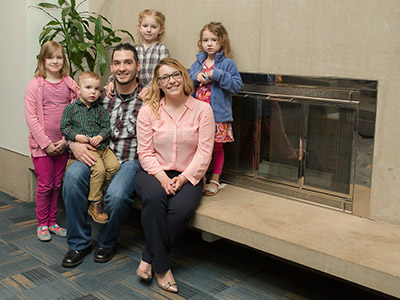 She also relies on family, friends or a babysitter to take care of the children for a few hours so she can write a paper or do research. “And sometimes, I involve my children in my homework,” she says. “For whatever reason, helping me with statistics is fun for them.”

Janczuk credits the strong support of her family for her success and recognizes that her husband is her strongest cheerleader. “He is incredible at cheering me on and encouraging me,” she says. “There have been many nights where I’ve made him listen to long scholarly papers that I’m sure he doesn’t want to hear about. I am constantly rambling off statistics and research that doesn’t interest him, but he listens anyway.”

Janczuk is a sophomore in Falk College with a double major in social work and psychology. On April 19, Janczuk, who has a GPA of 3.9, received an Academic Excellence Award at the HEOP Awards Ceremony. She was also selected to address the students, faculty and staff attending the event. “I know that you realize the opportunity to be in the HEOP program is one that would be foolish to turn down,” she remarked in her address. “You have access to a network of individuals—staff at this very college [University College] who go out of their way to make sure you’re successful. From the academic advisors, to the professors to the receptionist at the front desk; from the financial aid advisors to your peers, and even the dean—every person that surrounds you is here to support you. You have been handed that opportunity of a lifetime.”

When she completes her undergraduate degree, Janczuk intends to pursue a master’s degree in social work and perhaps a Ph.D. in psychology. Her interests lie within the criminal justice field, and she hopes to one day be involved in the criminal justice system addressing the mental health needs of inmates. Her goal is influenced by her husband’s profession as a corrections officer. “When you see a pattern of repeat visitors to a correctional facility, you begin to wonder what can be done to help them become more productive members of society,” she says.

“My hope is that I can give my children a better future due to my decision to earn a college degree and set myself up in a successful career,” she says. “As a non-traditional student, it is not always easy. You have to want it, and you have to work for it.”